You tell us. How’s the air feeling in your ride? Are you refreshed and cooled with full air flow when your A/C is pumping? Well, if you answered “”Yes, I am as cool as a cucumber,”” you can cross A/C inspection off your list.

For all the “”No”” respondents: do you fall into the “”my A/C is not cold enough”” or the “”it’s taking way too long to cool down,”” side of the spectrum? Don’t sweat, stop in for an A/C Performance Check and we’ll have you back rolling down those hot summer streets cooler than ever. So chill, your A/C is only an inspection away from cooler days.

How often do I need my A/C system recharged?

Only when the cool breeze no longer feels as chilly as you remember. Simple enough. Now, it is true that a well maintained A/C system can go its entire life without needing a recharge. But, that’s if you’re extremely lucky.

If you start noticing your A/C isn’t reaching those refreshingly cool temperatures, have your system inspected. In this situation, most cars will be low on Freon. And since the A/C is a sealed system, low Freon is a big sign that something is not right. It could be a small leak that needs attention or possibly part of the A/C is failing – bring it in and we’ll perform an A/C Performance Check and get to the root of the problem. We’ll get you back out there cruising with a nice, cool breeze again.

Typically referred to by the DuPont trade name Freon, the most common Freons are R-12, R-134A, and soon, HFO-1234yf. Freon is pretty similar to motor oil and radiator coolant in that it is a working fluid designed for a specific system; In this case, your car’s A/C system.

Refrigerant is a specially formulated mixture that’s sole purpose for transforming hot air into cold air. It does this by absorbing and releasing heat, ultimately leaving cool air behind.

Different devices, such as the home refrigerator, home A/C system or your vehicle may use different types of refrigerants. They may or may not be the same. Now that you know what cools down cars, homes and meat lockers, crank that baby up and marvel as your A/C turns stale hot air into your own personal ice box.
What exactly is Freon?

Sounds like an automotive A/C history class is in order. Well, welcome, pull up a chair and put on your thinking cap.

Freon, better known as R-12, was the primary chlorofluorocarbon (CFC) used in car A/C systems up until it was banned in the mid 1990s after the EPA discovered that it was depleting our planet’s ozone Layer. Talk about toxic.

The auto industry has since switched to the CFC free R-134a. Since the elimination of CFCs from the auto industry —and all industries for that matter—the ozone layer has regained its structure, and the ozone holes caused by CFCs are expected to fully close by about 2050 according to the EPA. 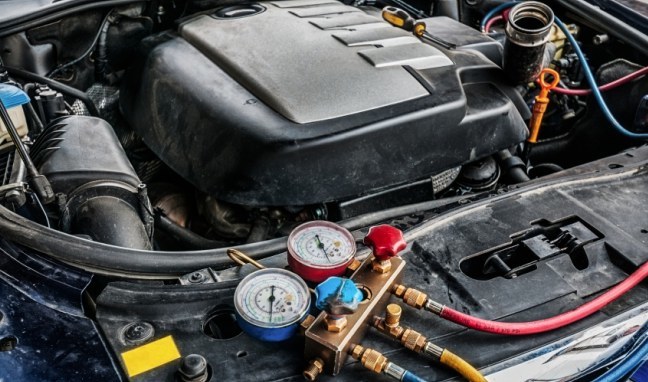