“If I only knew sooner.” We’ve all been there before. Fortunately, there are various indications and symptoms that your battery may need replacement:

Slow engine crank: When you attempt to start the vehicle, the cranking of the engine is sluggish and takes longer than normal to start. You’d best describe it as the “rur rur rur” starting noise sound.

Low battery fluid level: Car batteries typically have a part of the casing that’s translucent so you can always keep an eye on your battery’s fluid level. You can also inspect it by removing the red and black caps if they are not sealed (most modern car batteries now permanently seal these parts).

Bottom line: If the fluid level is below the lead plates (energy conductor) inside, it’s time to have the battery and charging system tested. When fluid levels drop, it’s typically caused by overcharging (heat).

Eww, there’s a stinky, rotten egg smell: You may notice a pungent, rotten egg smell (sulfur odor) around the battery. The cause: Battery leaks. Leaking also causes the corrosion around the posts (where the + and – cable connections are located.) The gunk may need to be removed or your car may not start.

Three years + battery age is considered an old timer: Your battery can last well beyond three years but, at the very least, have its current condition inspected on a yearly basis when it reaches the three year mark. Battery life cycles range from three-to-five years depending on the battery. However, driving habits, weather and frequent short trips (under 20 minutes) can drastically shorten the actual life of your car battery.

How do I determine if my battery is too old?

For one thing, you can check the four- or five-digit date code on the cover of your battery case. The first part of the code is key: look for the letter and digit. A letter is assigned to each month — you know, like A for January, B for February and so on. The number that follows nods to the year, as in 9 for 2009 and 1 for 2011.

This code tells you when the battery was shipped from the factory to our local Interstate Battery wholesale distributor. The additional digits tell where the battery was made. Car batteries last, on average, three- to-five years. Mind you, there are also weak battery signs to watch for, like a slow engine crank of low fluid level.

If your battery case is swollen or bloated, there’s a smelly rotten egg scent coming from the battery or your check engine light appears, trouble may be beyond the bend. And if it’s over three years old? Consider it time for close monitoring. That’s what we’re here for. 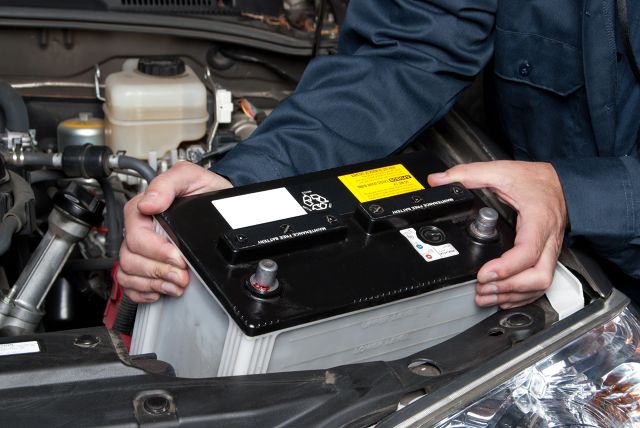